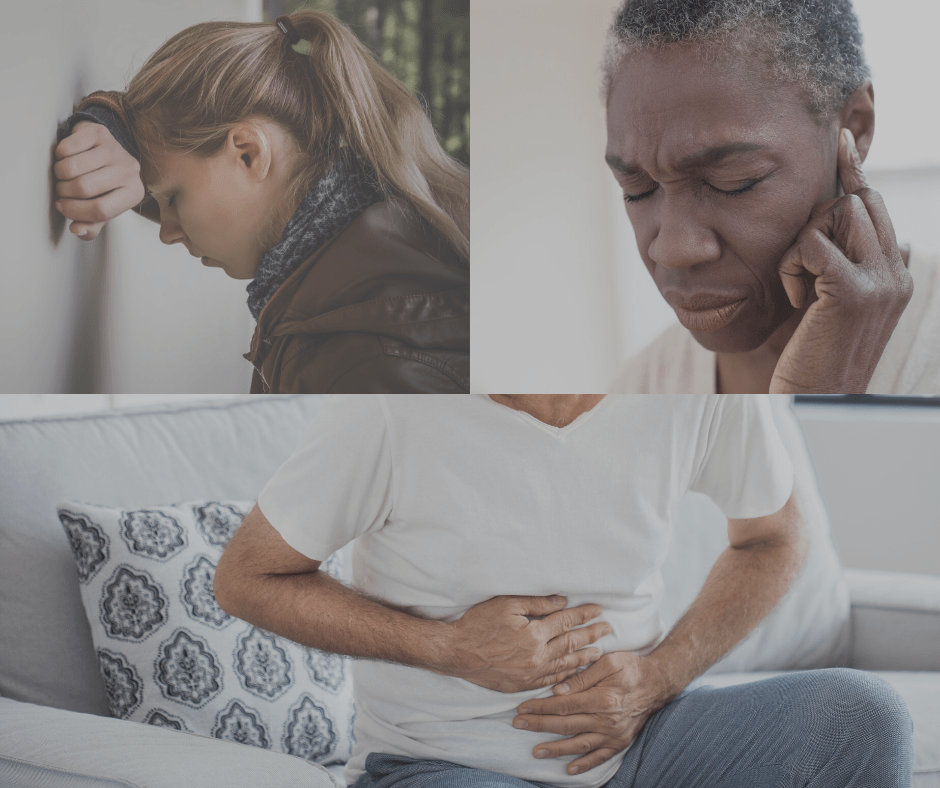 If you ask most of us, we can likely list numerous “types of migraine” that we experience. Some make us dizzy, cause us to speak unintelligibly, give us severe nausea and vomiting, or cause various types and levels of pain in different locations. Some of our migraine attacks may occur with visual symptoms, cognitive symptoms, food cravings, or make us feel depressed or anxious. I know that for me, certain symptoms often occur together. For example, the migraine that makes me hungry also makes me tired. If a migraine makes it difficult for me to think, it also seems to last longer. I could go on talking about these differences for days. Yet, despite all the variability we might have within our own migraine disease, there are really not that many official ICHD-3 clinical categories of migraine. In fact there are only two main migraine classifications: Migraine with Aura and Migraine Without Aura. After that it gets more specific. Here we’ll talk a little about three of the main subtypes under Migraine with Aura: Vestibular Migraine, Migraine with Brainstem Aura, and Hemiplegic Migraine.

Sometimes when we get a certain symptom often enough we may wonder: is this a new diagnosis? Or just a new variation of my same old migraine? If we experience dizziness during migraine episodes does it mean we have vestibular migraine? Or, if we are sometimes clumsy, weak, or have trouble speaking do we have hemiplegic migraine?

I am reminded of my college psychology professor who had a particularly awesome sense of humor. He said that reading an introductory psychology textbook could make you think you had every mental illness ever described. But not to worry, because it was statistically impossible for everyone in a class that size to actually have them all. I think this idea also applies when we read about the various types of migraine. At first glance, we often see ourselves in all the diagnostic criteria. If you feel you may have one of these migraine types, seek out your healthcare provider for their opinion.

Let’s look a little closer at these variations of migraine with aura.

The International Classification of Headache Disorders (ICHD-3) classifies vestibular migraine as an “episodic syndrome that may be associated with migraine”.

To understand VM, we must first understand what vertigo is and what it is not. “Dizzy” is a broad term we learn as kids. It encompasses most sensations of bodily confusion like lack of equilibrium and lightheadedness as well as vertigo. Thirty percent of people with migraine report sensations of dizziness from time to time. So dizziness in the setting of migraine is not uncommon.

Vertigo is actually a very specific type of dizziness, the kind you get when you feel like you’re spinning, but you’re actually sitting still. Remember when you were a kid and you would spin round and round in a swivel chair, then get up to walk but you couldn’t? That is the sensation of vertigo. Vertigo stops being fun when we can’t control when it comes and goes. It isn’t often you see a person affected by migraine spinning in a swivel chair to pass the time. These sensations just aren’t fun to us anymore.

Vestibular migraine occurs in 1% of the general population and about 9% of people who visit migraine clinics¹. Official diagnostic criteria for VM includes at least 5 episodes of vestibular symptoms, half of which were associated with migraine (with or without aura), and certain features such as visual aura, photo/phonophobia, or aggravation by exercise. Interestingly, symptoms of vertigo and symptoms of migraine do not always occur together in VM. Sometimes individuals with VM will experience vertigo without migraine, and migraine without vertigo.

Unfortunately, there are very few trials on treatments specifically for VM. Medications for combatting nausea and vomiting are very important and often include dimenhydrinate (Dramamine) or benzodiazepines. There is only anecdotal evidence that triptans may be effective in VM. But there is a small amount of data showing that the corticosteroid methylprednisolone (Solu-Medrol, used to decrease inflammation) may be helpful. If attacks of VM are frequent, migraine prophylactic medications may be prescribed, but there is little evidence that one medication may be better than others for this specific disorder.  Medicines specifically named for this indication that may not be considered first-line therapy for other types of migraine are: acetazolamide and lamotrigine².

If this description of vertigo and VM is something you experience, bring it up with your healthcare provider.

Migraine with brainstem aura (MBA) is a classification that used to be known as basilar artery migraine or basilar migraine. It was recently re-termed to take the emphasis off the word “artery” as it is now believed that involvement of the basilar artery is not likely. There is some controversy surrounding this diagnosis and publications vary in regard to its prevalence and its cause/origin. Everyone seems to agree it is a rare condition; the most recent and conservative data estimates that only 0.04% of the general population meets the criteria for MBA3. Another group has published a paper arguing that perhaps the symptoms of MBA do not originate in the brainstem at all, but from the cortex, and that this sub-type should be classified as typical migraine with aura⁴. Regardless of the lack of agreement, it is currently its own separate diagnosis.

This type of migraine occurs when aura symptoms are of the type thought to originate from the brainstem, but there is no motor weakness associated with the aura (see hemiplegic migraine below). According to ICHD-3, the diagnostic criteria for MBA is migraine with aura including at least two of the following symptoms: slurred or slow speech (dysarthria), vertigo, ringing in the ears (tinnitus), partial hearing loss (hypoacusis), double vision (diplopia), impaired coordination (ataxia), or decreased level of consciousness.

This diagnosis comes with special clarifications. It states that in diagnosing MBA, care must be taken not to confuse dizziness with vertigo, or diplopia with blurred vision; and dysarthria should not be confused with other language problems like the word searching that sometimes occurs in individuals taking topiramate, etc.

MBA is treated much like typical migraine with aura except that some medications like triptans and ergotamines are contraindicated in this disorder because they were never tested in this group due to fears of the effects on the basilar artery. This is yet another controversy. While these theoretical risks exist, at least one study has shown that triptans were safe and effective in a group of patients with MBA⁵.

Hemiplegic migraine can be familial (genetic) or sporadic (new onset in a family member).  People with hemiplegic migraine experience motor weakness during their aura. This is the main differentiating factor between HM and other migraine classifications. The motor weakness is not always on the same side as the head pain. Severe attacks of HM can occur that may progress to seizure, decreased consciousness, or coma. Most individuals who experience HM also experience migraine attacks with typical aura (without weakness).

Three genetic mutations have been identified in HM. The affected genes are called CACNA1A, ATP1A2, and SCN1A. These are all ion channel mutations. Ion channels are in the membranes of “excitable” cells like those in our brain and nervous system and are meant to regulate the passage of ions, like calcium and sodium, in and out of the cells. These gene mutations can be tested by a blood test. If you would like to be tested you should discuss this with your physician. However, it is believed that not all the genes at fault have been identified. Twenty-five percent of affected families studied, and the majority of sporadic (new mutation, not inherited) cases do not have mutations in the known genes.

Differences between HM and Typical Migraine with Aura:

Minor head trauma is a trigger for HM. This is rarely the case for typical migraine with aura (MA). HM has a high rate of sensory aura and aphasia (inability to understand or express speech). These are much less frequent in typical MA. HM has a lower frequency of visual aura than MA, in fact, 10% of people with HM do not experience visual aura at all. HM auras are of longer duration than aura in typical migraine.

In HM, motor weakness is always associated with another aura symptom –usually a sensory aura. Sensory auras vary, but often are explained in the following manner: “tingling in one of the fingers (that) gradually progresses to the other fingers, up to the arm, and then affects the face, tongue, and later the body and leg.” Some individuals will feel numbness after this phase. Motor weakness varies from mild clumsiness to paralysis – usually beginning in a hand and progressing to the face. Speech troubles are usually related to one’s ability to express themselves, the ability to comprehend is not as affected.

Medications used for the prevention of typical migraine can be used in individuals who have frequent HM. The sodium channel blocker lamotrigine has been noted as a good treatment option in this group because it was shown to be effective in a small group of patients with motor aura. Acetazolamide has also been shown to be specifically helpful in a group of people with HM.

Acute treatments are a little more restricted in HM. There are fears that any medication that causes vasoconstriction could cause the aura to become worse; therefore, people with HM are often excluded from these trials. For this reason triptans, Midrin, DHE, and paracetamol (Tylenol) are all contraindicated in HM6.

In closing, vestibular migraine, migraine with brainstem aura, and hemiplegic migraine all fall under the umbrella of migraine with aura. The experience of migraine with aura is highly diverse and highly variable. This fact can cause confusion and anxiety in an illness that already brings with it such a great mental, emotional, and social burden. If you feel that your symptoms regularly fall into one of these classifications, document and explain these symptoms, including frequency and severity,  to your health care provider. It is possible that you could benefit from therapy that is more targeted toward your specific migraine type; or that there are therapies you should be avoiding.

Originally Published on January 30, 2020 at the Association of Migraine Disorders: https://www.migrainedisorders.org/migraine-types/